Northern Ireland, 1979: Nuala Kelly takes no prisoners. A tough nine-year-old living with her mother, brother and grandfather, she thinks the class bully is just a big baby, and that all the nuns are cranky old wrinkled up cronies. She loves Thin Lizzy and The Undertones – just like her big brother, Oran. He’s fifteen and thinks he’s Casanova. Nuala thinks he’s more like Jesus; she’d do anything for him. But what she does one day for her brother, no-one could ever have imagined…
Set in a prison ten years later, Grenades is a compelling drama that has at its heart the bruised innocence of Nuala, who must re-live the events of her childhood and finally make sense of them all.

Tara McKevitt – Grenades won the RTÉ PJ O’Connor Radio Drama Award in 2010 and went on to win Gold at the New York International Radio Awards, and a PPI Award. Other Work: Junk shortlisted for the Tron Theatre, Glasgow, New Playwright Award, 2010. Selected for The New Playwrights Programme at The Abbey Theatre, and invited to the Annemakerrig Artists’ Centre by the Stewart Parker Trust 2011. As part of the Traverse Theatre Edinburgh’s Traverse Fifty Programme short plays Tourists, Reality, and Thirsty received public readings 2013. The Hidden Glen work-shopped at the Abbey Theatre 2015. The Weight of a Tonne commissioned by Abbey Theatre and public reading performance on Peacock stage as part of Future Tense series 2016. Radio plays An System Nua, and Panic broadcast on RTE Radio 1. 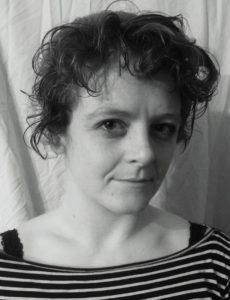 Emma O’Grady-  Emma is originally from Co. Laois and is now based in Galway. Emma works in theatre as an actor, production manager & lighting technician. She has an MA in Drama & Theatre Studies (NUIG) and was co-founder and co-artistic director of Mephisto Theatre Company 2007-2014. Emma regularly works with Macnas, Branar, Moonfish and THEATREclub. She is currently developing her new show What Good is Looking Well When You’re Rotten on the Inside? which will premiere at the Galway Theatre Festival in April 2017.